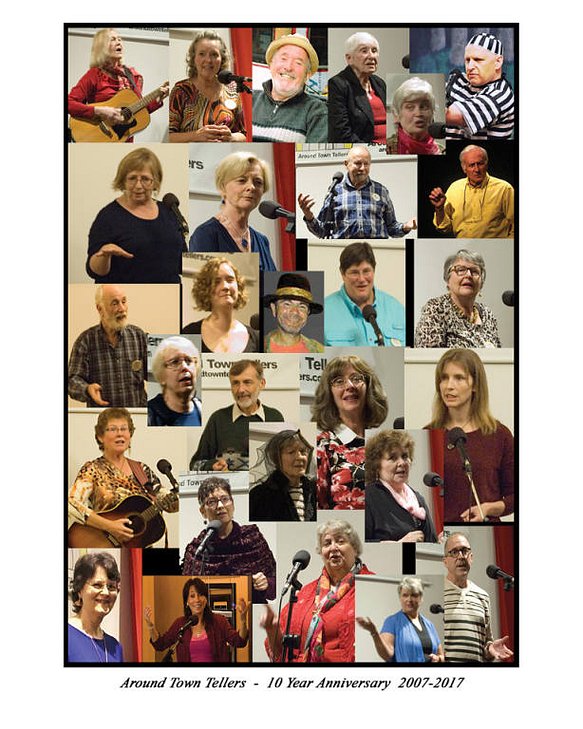 Around Town Tellers: The Beginning
by Margaret Murphy

The story flame ignited for The Around Town Tellers in 2006. Early in the year, I spoke with Katherine Mauer, who had helped to organize a storytelling circle in Nanaimo years before. But things really started to heat up in August when Laurie Hutchinson called me and wanted to know everything there is to know about storytelling.  Janet Sexsmith soon joined us on our quest to bring storytelling back to Nanaimo. During the next few months we gathered around the kitchen table. Over pots of Rooibos tea, we shared our dreams and schemes of building a storytelling community. Laurie’s specialty was event planning. Janet had buckets of experience with group facilitation. Perfect. Our vision emerged: to re-energize storytelling in Nanaimo.

One of our big questions was venue. Where would we hold these storytelling evenings? We wanted to gather community on a regular basis. We needed a place that was central and charming, quiet and comfortable, and with parking! As soon as I stepped into Coyote’s Café, on Terminal Avenue, I knew: “This was the place.” I spoke with Nancy the owner/manager and described our vision. She immediately said yes. I couldn’t believe it. And so we began.

Friday, January 5, 2007, was our launch. Storytelling was back in Nanaimo! Flyers were made, newspapers notified, e-mails sent out. We invited Vancouver storyteller Duncan Shields to lead the parade as our feature teller, and the wonderful Barry Hall accompanied him on guitar. And what a launch! 75 people showed, and 20 had to be turned away. Our beloved Judy Brown greeted people at the door. We crammed into the cafe, every seat taken, some leaning against walls, some standing in corners. Laurie, Janet, my husband Noel and I stood and watched in joy and awe. Duncan was in his element. We did not have a microphone and the huge audience leaned in to hear. We launched and we learned.

Every month, about 55 people came to Coyote’s to share in the stories, poems, music and song. Over the next few months, our story family grew: Dorothy Houghton joined us in February and continued to be our reliable Go-To House Manager for over a decade. One Friday night, a woman stopped in for a coffee, curious about the crowd, and in a few short months joined our group and shared the hosting of our story evenings! Thank you Sharon Goldston. Craig and Evonne Sauve soon volunteered their help and for many years were our gracious ticket sellers at the door. We purchased a sound system, Noel Lewis Watts became our valued sound man. Sandy and Bev Cole joined the family.  Every month they created magic both onstage and off.  To review and assess Stories on Friday, we gathered after every storytelling at Sharon Styve’s, our gracious hostess and notetaker. In 2008, we held a contest to name our group: Around Town Tellers. In the same year, we also launched our website www.AroundTownTellers.com . The following year, in March 2009, we announced the winner of our logo contest which now shines on our website, banners, notecards and magnets. Thank you Diane Verhiel.

And you came, Dear Listeners. So many that in the summer of  2009, we had to leave the café for a larger venue. We moved to our current location, the Unitarian Hall on Townsite in September, 2009. And you continue to come. People who know and love stories come to Stories on Friday. People who have never heard of storytelling join our circle!

In January 2017, we celebrated our 10th Anniversary of Stories on Friday -- 100 evenings of storytelling! Storyellers come from Vancouver, from Victoria, from Courtenay and Comox, from Tofino and Abbotsford, from Ottawa and all the way from Virginia! We added music to the mix, and often invited local singers and musicians to share the evening with us. They shared their stories their talents and their hearts. Today there are 25 volunteers and tellers who work hard behind the scenes to make ATT such a success and 75+ audience listeners who come out each month to support and enjoy Storytelling. We are so honoured and proud to discover that Around Town Tellers is now the largest monthly gathering of story sharing in the country.

Workshops and storytelling courses began and our community continues to grow.  In January 2022, the Around Town Tellers celebrated our 15th year of storytelling in Nanaimo. Come join us!

About the Around Town Tellers